WinterStorm unveils After the 'Storm line up

The organisers of WinterStorm Rock Weekender in Troon have announced the return of their acoustic event After the ‘Storm with the unveiling of Danny Vaughn, Uli Jon Roth and Nathan James as the confirmed line up for the event on Sunday 1st December 2019.

After the ‘Storm was added to the end of the weekend in 2018 and was a complete sell out featuring Terry Brock, Geoff Tate and Steve Overland performing on the Sunday afternoon to as seated capacity audience of 140 guests. 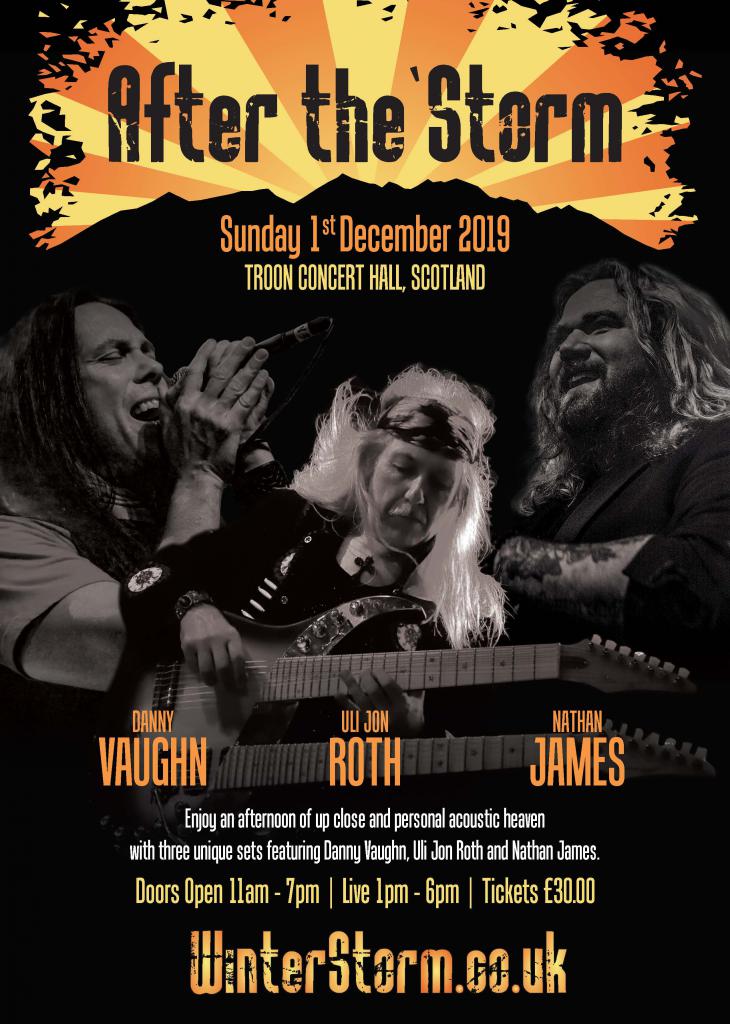 “After the ‘Storm just seemed to be such a good name that we had to develop something around it to be honest! We had been putting on intimate events on the second stage over the year and thought having a chilled out acoustic afternoon could be just the perfect tailing off of the weekend. The response from last year seemed to back that up so we’re back again with the same format again.”

The event is seen as an add on to the weekend and is not trying to turn the weekend into a three-day event.

“We are happy with the two days of WinterStorm itself and don’t think an extra third day is on the cards to be honest; After the ‘Storm just gives a totally different ending for those that fancy a seat and a beer on a Sunday afternoon before heading home.

After the ‘Storm opens its doors (for Full Scottish Breakfast!) at 11am with the first act on stage at one o’clock and the whole day wound up just after five pm.  Each of the three artistes will perform a seventy minute set with bar and kitchen remaining open all day.

First up is the amazing Danny Vaughn from stars of WinterStorm 2017 Tyketto. Danny will open the day with an eclectic set of his own favourites and of course a good few Tyketto numbers flung in there too!

Next up will be Uli Jon Roth the legendary Scorpions guitarist. Uli will be playing the main stage of WinterStorm on the Saturday night but his acoustic set is something entirely different with a masterclass in different guitar styles and a diverse track selection. Uli Jon Roth up close and personal like this is not to be missed!

Closing the day and indeed the weekend is the returning Nathan James who performed on the mainstage in 2016 with his band Inglorious. The effervescent Mr James will perform with his guitarist Danny Dela Cruz and the set promises to showcase his superb voice with a mix of Inglorious tracks and no doubt some unexpected covers too!

2019 is year four of the Classic Rock Weekend WinterStorm held at the end of November each year in the Scottish seaside town of Troon on the west coast of Scotland.

The first three years of the independent event has seen it punching above its weight with an admirable line up of rock legends gracing the stage and an equally talented line up of young up and coming rock bands alongside.

The line-up for the fourth year of the event has been knocking rock fans across the UK and beyond for six with tickets sent out to Coast Rica, Norway, Iceland, the States, Wales, England, Sweden, Belgium, Switzerland, France, Germany, The Netherlands, Ireland, Northern Ireland and from all parts of Scotland. Local hotels have sold out their rooms and the trains from Glasgow will see an influx of music fans.

The main stage features seventeen bands over the two days across genres and as well as the main headline acts will introduce some superb unsigned bands.

The weekend features some of the most famous names in rock and includes Skid Row, Last in Line, FM, Uli Jon Roth and HEAT..

Classic rock bands from the past are represented in spades – Pete Way, Zal Cleminson, Diamond Head, Praying Mantis and Tygers of Pan Tang and of course the WinterStorm “House band” featuring Chris Glen, Dougie White and Paul McManus will be closing the Saturday night with some very, very special St Andrew’s Night guest this year.

The Amorettes, Pat Mcmanus Band, The Rising Souls, Outlaw Orchestra and The Brink complete the main stage line up.

The event is being MC’d once again by the legendary rock DJ Tom Russell who jumped at the chance to be involved once more.

“I think it’s magnificent that a town like Troon has put itself firmly on the Rock map and it this event gets the support it’ll be great not only for rock fans from all over the UK and beyond but also for local businesses and tourism. It’ll be great fun to get down the coast again for the weekend, listen to some wonderful musicians and get that Ayrshire sea air.”

“It’s great that it’s not only the named and older bands that are on show. I can’t wait to see the young bands – Hollowstar, Dead Man’s Whiskey and Everyday Heroes for example. It’s probably one of the best and most diverse rock weekends in the whole of the UK”