Giving something back to the community always seems a bit of a cliche but our involvement in the first instance with music events in Ayrshire was with [email protected] in an effort to do just that. We have always felt that music had and has something to give on multiple levels and helping others is a critical part of what we want to achieve.

So whilst not a charity event, the first year of WinterStorm in November 2016 saw the audience generating more than a £1000 for both the local RNLI and Nordoff Robbins. It is a clear secondary aim to develop a strong relationship with charities through our music events and we are already planning towards a weekend of fund raising in September for more good causes. We aim to support good causes through our events throughout the year.

Recently, we have been watching the efforts locally of Connie at local bar Girvan's who has been working her butt off raising funds through a series of local auctions for the annual Glasgow Taxi Outing to Troon in June. We thought WinterStorm Troopers and bands may wish to help us help them.

We are looking for small donations from the WinterStorm Troopers, musicians and generous Rock fans who came to Troon last year or heading our way this way in the future.

Fundraising will go towards

All donations however small will go fully to helping the kids from Glasgow schools have a day to remember by the sea.

The History of The Troon Taxi Outing 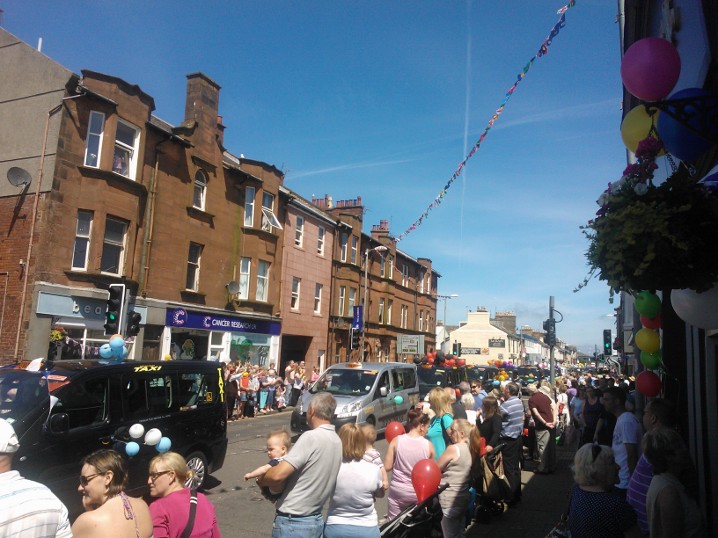 Early in 1945 three taxi drivers organised a bus run which proved very successful. They were R. McLaren, J. Sampson and W. Campbell. It was found after the bus run that they had some cash in hand and they decided to utilise this money to give some disabled children a day at the coast, and that very year, with the aid of some volunteers, they conveyed children from Eastpark Home in their taxis to Saltcoats.

This proved so popular that it was decided to make it an annual event. Gathering funds was not a problem as all the taxi drivers contributed to making the outing a success. Around this time the best known band in Glasgow was Billy McGregor and the Gaybirds from the Barrowland Ballroom and they were asked to help the Children’s Outing which they did, wholeheartedly.

Billy McGregor, W. Donaldson, and Maurice Deans from the band joined the newly formed committee and the name of the Outing became a real memory tester; Glasgow Taxi Men and Gaybirds Dance Band Sick Children’s Outing Fund. Billy McGregor and his band were associated with the outing until the middle 1950’s and took part in all the annual outings, providing the music, which was greatly appreciated by all in attendance and no doubt helped considerably in bringing the outing to the notice of the public in general.

The second outing in 1946 did not go to Saltcoats as the first one had but went instead to neighbouring Troon, and since that day every outing has been to this venue. All facilities are laid on for the children and if the weather is inclement the Town Hall is put at their disposal. The residents of Troon all join in the fun and the funds of the outing benefit greatly from the licensed premises in the town who throughout the year take collections which help to make the outing the success which it is. 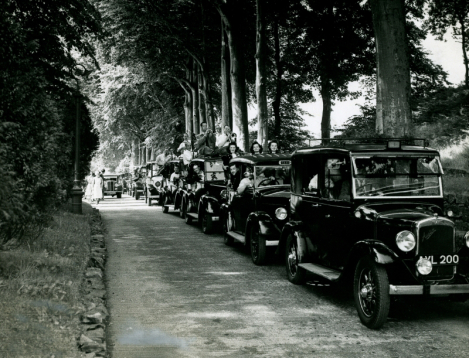 Early on when Mearnskirk Hospital was solely a hospital for children with T.B. most of the children were lifted from here, but as this disease has been all but eliminated the Kiddies Outing Committee take children from a variety of Additional Learning Support schools all over Glasgow. Needless to say everything is done so that the children have a day to remember. Clowns, jugglers, musicians are there in abundance and the nurses and carers who accompany the children all participate in the fun. All these people give their services freely and all who have taken part in the subsequent years deserve a hearty vote of thanks. Over the years it is estimated that some 60,000 have benefited through the activities of the Glasgow Taxi Drivers who organise and take part in the Kiddies Outing.

All this is made possible due to the generosity of the Glasgow Taxi Drivers, and in particular the Glasgow public, the authorities and the kind people of Troon. Many of the licensed premises in our city have a collection box on their counters, and over the years many thousands of pounds have been collected. No one objects to helping the children and all who contribute; the caterers and those who provide the confectionery should be proud of their efforts and the outward show of their generosity can be seen on the faces of the children on their big day in Troon.

The drivers who spend a lot of time decorating their cabs and dressing up in all types of costumes to help keep the children amused are also due a pat on the back. Police Scotland also enter into the spirit of things and a special thanks to them for the way in which they organise and convey the massive outing through the City on the way to Troon. The Police Pipe Band are also in attendance and set the convoy off from Kelvin Way and also into Troon itself.