Girlschool are a British rock band that formed in the new wave of British heavy metal scene in 1970s and frequently associated with contemporaries Motörhead. They are the longest running all-female rock band, still active after almost 40 years.
Originally formed in 1975 from a school band called Painted Lady, Girlschool enjoyed strong media exposure and commercial success in the UK in the early 1980s with three albums of 'punk-tinged metal’ and a few singles.

During their career, Girlschool travelled the world, playing in many rock and metal festivals and co-headlining with important hard rock and heavy metal bands. They maintain a worldwide cult following and are an inspiration for many female rock musicians. Despite frequent changes of line-up, original members Kim McAuliffe, Enid Williams and Denise Dufort are still in the band. The only original member no longer in the band, lead guitarist and singer Kelly Johnson, died of cancer in 2007.

Girlschool original line-up: Kim McAuliffe, Enid Williams, Kelly Johnson, Denise Dufort (1981)
In December 1978, Girlschool released their first single, "Take It All Away", on the independent record label City Records, owned by Phil Scott, a friend of the band. The single had some radio airplay and circulated in the underground scene, coming to the ear of Ian Kilmister, commonly known as Lemmy, leader of the British rock band Motörhead, who wanted to meet the band. Lemmy, together with Motörhead and Hawkwind manager Doug Smith, went to see the band performing live and offered them a support slot on Motörhead’s Overkill tour in the spring of 1979. This was the start of an enduring relationship between the two bands that lasts to this day. After the tour and a few other shows supporting Welsh band Budgie, Doug Smith became the manager of Girlschool and obtained an audition with the British label Bronze Records, at the time home of Uriah Heep, Motörhead and Juicy Lucy. Bronze’s owner Gerry Bron himself attended the audition and was impressed by Girlschool's stage presence and musicianship, offering them a contract with his label in December 1979.

The British rock movement known as the new wave of British heavy metal (frequently abbreviated in NWOBHM), which started in the late 1970s and broke in the mainstream in the early 1980s, was just exploding in the United Kingdom and the band gained the support of a strong label at exactly the right time to exploit the moment and form a solid fan base.

The band entered the recording studio with experienced producer Vic Maile in April 1980. Vic Maile had been working as live sound engineer for many important acts, like The Who, Led Zeppelin, The Kinks and Jimi Hendrix, producing also the first two seminal albums of Dr. Feelgood and a few punk bands in the late 70s. He captured the raw but powerful sound of Girlschool in ten short songs, with lead vocals shared by Williams, McAuliffe and Johnson. Girlschool released their debut album, Demolition, in June 1980, alongside the singles "Emergency", "Nothing to Lose" and "Race with the Devil". Demolition reached No.28 in the UK Album Chart in July 1980.

In the same period, albums and singles from Judas Priest, Saxon, Def Leppard, Iron Maiden, Motörhead and other bands of the NWOBHM reached high positions in the UK charts, while the same bands did tours and concerts all over Europe. Girlschool participated in this frenzied touring activity, travelling in Great Britain and visiting Europe both as headliner act and as support to label mates Uriah Heep and Motörhead. On 20 August, Girlschool and Motörhead were filmed performing live at the Nottingham Theatre Royal for the Rockstage programme, broadcast by the ATV station on 4 April 1981. In this period, the band was subjected to intense media coverage by music magazines, radio and TV, interested in the novelty of a successful British all-female metal band. The barrage of interviews and promotion did not stop the production of songs and the girls released the new single "Yeah Right" in November 1980.

In December 1980, Girlschool officially started recording the follow-up to Demolition, again with producer Vic Maile, who had meanwhile produced Motörhead’s classic album Ace of Spades. During the sessions, Maile suggested a studio recording team-up with Motörhead, resulting in the release of the EP St. Valentine's Day Massacre. The EP contains the cover of Johnny Kidd & The Pirates’ song "Please Don’t Touch" and two self-covers, with Motörhead performing Girlschool's "Emergency", and Girlschool playing Motörhead's "Bomber". Dufort played drums on all songs, because Motörhead's drummer Phil "Philthy Animal" Taylor was recovering from a neck injury. She also played the drums during the BBC One Top of the Pops TV show of 19 February 1981, where the two bands performed "Please Don’t Touch" under the moniker Headgirl. The EP reached No.5 in the UK Single Chart in February 1981 and was certified silver in December 1981, the best sale performance for both bands at the time.

The album Hit and Run was released in April 1981, soon followed by the eponymous single. Both releases were very successful in the UK, with the album reaching position No.5 and the single position No.33 in the respective charts. The album charted also in New Zealand and in Canada, where it went gold. The success of their second album made Girlschool a rising attraction in the boiling British hard rock and heavy metal scene, ensuring headliner slots in medium-sized arenas in their sold-out UK tour or guest slots in stadium size concerts of major attractions like Black Sabbath and Rush. No dates in the USA were arranged, but Girlschool visited Canada in July. Their 1981 tour culminated on 28 August, headlining the Friday night of the three-day Reading Festival. The Friday Rock Show on BBC Radio 1 would later broadcast the Reading set, but the recording has not received an official release.

At the beginning of 1982, Girlschool did a European tour and, at the last Danish date in Copenhagen with supporting act Mercyful Fate, McAuliffe received a potentially-fatal electric shock from her microphone. She recovered fast enough to complete a Japanese tour, to do other European shows supporting Rainbowon their Difficult to Cure tour and to start working on new material for the next album. However, the gruelling schedule of recordings, promotional work and concerts had started to take its toll on the group, with bassist Enid Williams the first to give up, right after the release of Wildlife in March 1982, an EP designed to launch the upcoming album. On the recommendation of Lemmy, Williams was replaced by Ghislaine 'Gil' Weston, former bassist of the punk band The Killjoys.
Girlschool’s third album Screaming Blue Murder was recorded in February and March 1982 under the direction of Nigel Gray, the successful producer of The Police and The Professionals. The album had a worldwide release in June 1982 but, despite the strong promotion, it reached only No.27 in the UK Album Chart.

Girlschool remained a strong live attraction and their 1982 world tour led the band for the first time in the USA to play in stadiums, supporting Iron Maiden and Scorpions. NWOBHM acts like Judas Priest and Def Leppard started to be very popular in America and the girls and their record label had no intention to fall back in the conquest of that large market.

Girlschool continued to tour Europe and South America in 2011-12 and returned in Japan in 2013. In early 2015, they recorded a new album titled Guilty as Sin with producer Chris Tsangarides, which was released on 13 November 2015, since then Girlschool have been actively touring and gearing up for the band’s 40th Anniversary.

Just like most punk songs, Girlschool’s lyrics usually have short and direct texts, often reflecting the wild rock 'n' roll lifestyle and treating sex and romance as seen from a feminine point of view, with the use of reverse sexism and tongue-in-cheek sense of humour. Although many of their songs revolve around these topics, the band members themselves never resorted to sex appeal gimmickry: as Creem noted appreciatively in 1982, "Girlschool doesn't pimp their gender". Some of their songs deal also with more serious matters, such as exploitation and abuse of women, murder, addiction, the destruction of the environment, social and political issues. 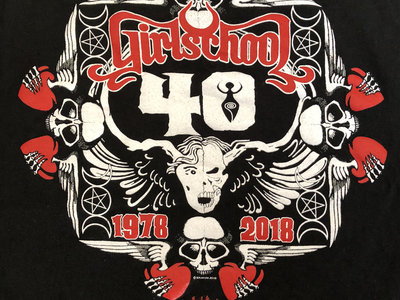 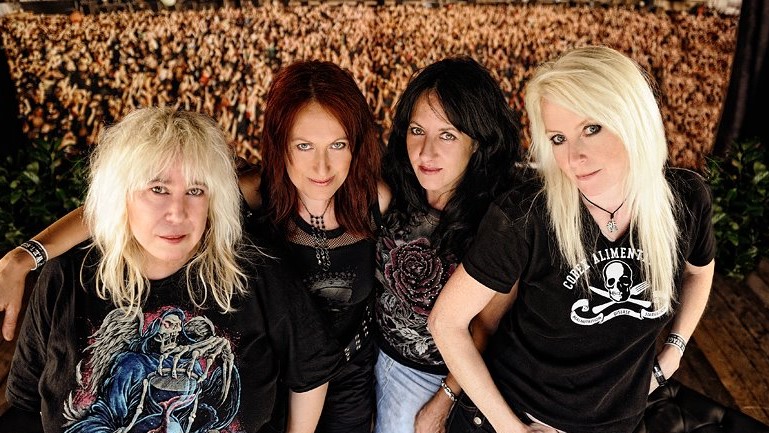 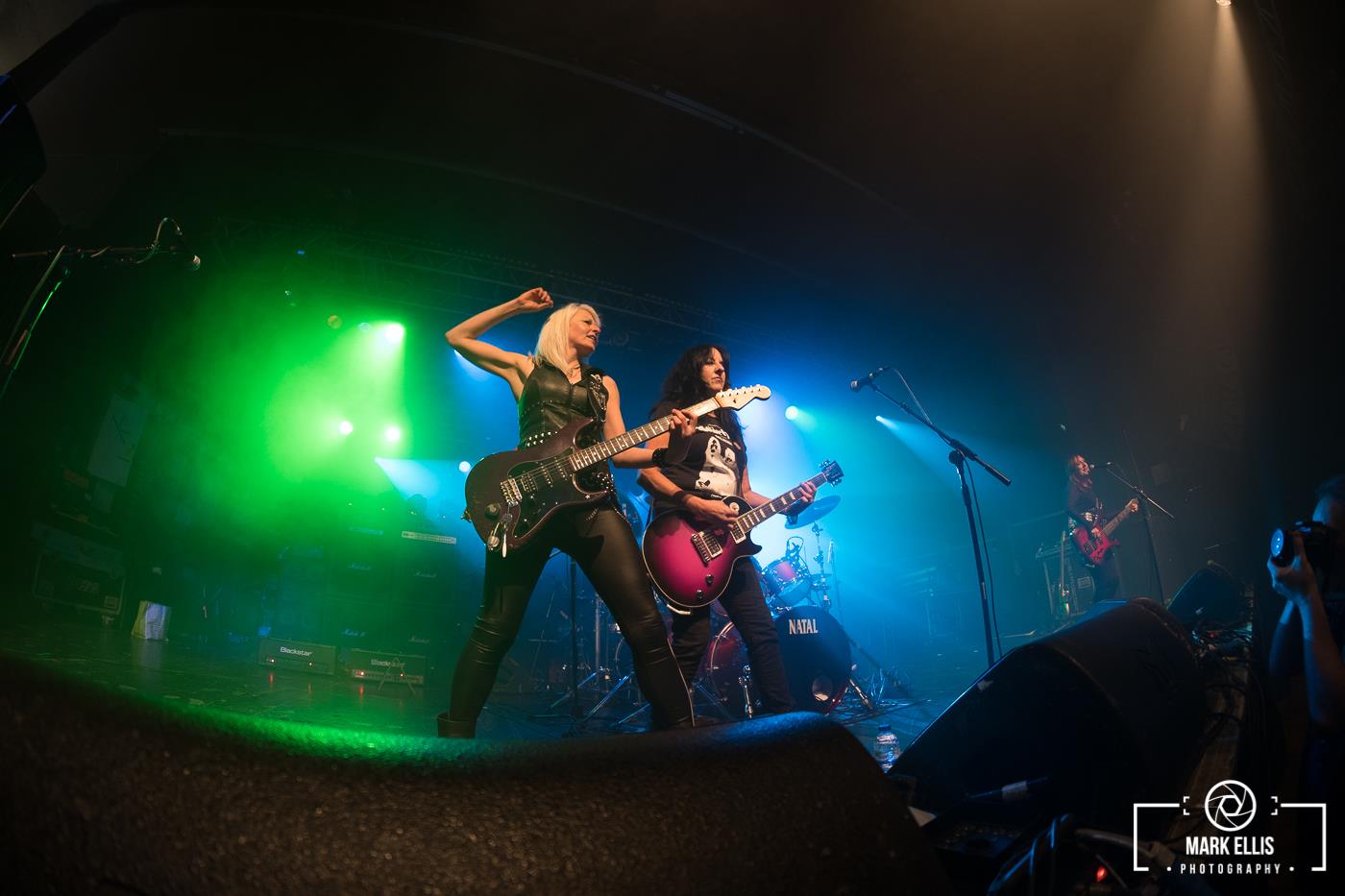 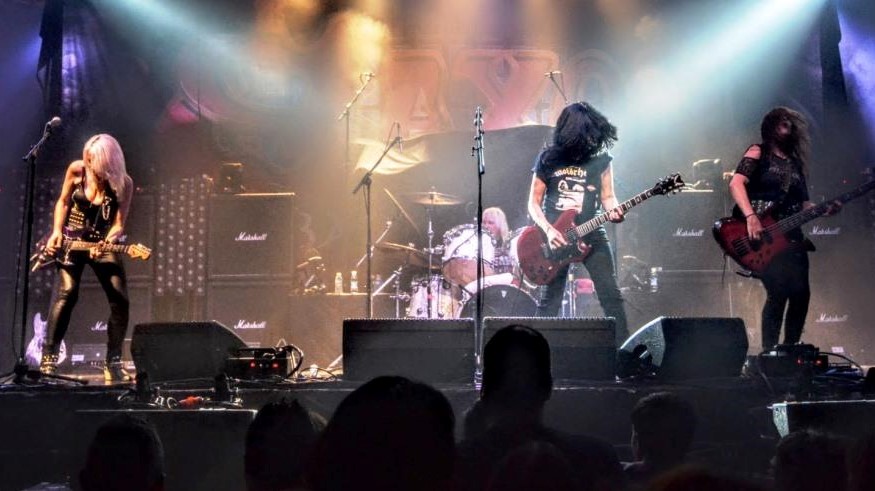